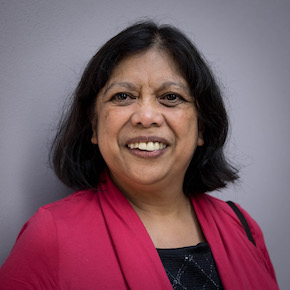 has been an active campaigner and advocate over the past 35 years on indigenous peoples human rights at community, national and international levels. She is the Senior Policy Advisor and former Director of Forest Peoples Programme (UK). She also worked as Indigenous Policy Advisor and Team Leader of the Indigenous Peoples’ and Biodiversity Programme Tebtebba Foundation (Indigenous People's International Centre for Policy, Research and Education) from 2004- 2013. She is an environment and development educator and researcher with expertise on indigenous knowledge and traditional occupations, cultural and biological diversity, international standards on forests, water and energy, extractive industries and corporate accountability.

An additional focus of her work is community-based monitoring and information systems as tools for local governance. Indigenous and Local Communities are supported to map and monitor the state of their lands, territories and resources; track implementation of the UN Declaration on the Rights of Indigenous Peoples and the 2030 Agenda for Sustainable Development and hold governments and corporations to uphold applicable standards and obligations. She co-ordinated an International Expert Seminar on Indicators Relevant for Indigenous Peoples.

She has served as Member, UN Secretary General’s Scientific Advisory Board (UNSAB) (2014-2016); as Commissioner, World Commission on Dams1(1998-2000) and as Executive Secretary of the International Alliance of Indigenous and Tribal Peoples of the Tropical Forests (international network of indigenous organisations in tropical forests from 1994 – 1999).