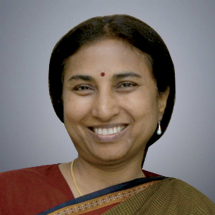 is an expert on land rights, food security, and gender who has published award-winning books on gender and land issues. She received the Balzan prize for Gender Studies in 2017, the Padma Shri prize from the President of India in 2008, and held top positions in several academic bodies. She is currently Professor of Development Economics and Environment at the University of Manchester. Prior to this, she was Director and Professor at the Institute of Economic Growth, Delhi.

She is a member of the Future Earth Science Committee. She has also served as the President of the International Society for Ecological Economics, Vice-President of the International Economic Association, and President of the International Association for Feminist Economics. Agarwal has written extensively on land rights; environment and development; food security; the political economy of gender; poverty and inequality; and agricultural change. Her publications include the award-winning book, A Field of One’s Own: Gender and Land Rights in South Asia, and Gender and Green Governance. A three-volume compendium of her selected papers is forthcoming from Oxford University Press. In 2008 she received a Padma Shri from the President of India, and in 2010 the Leontief Prize from TuftsUniversity “for broadening the frontiers of economic thought”.